Should we ship borrowed artwork again to Russia? 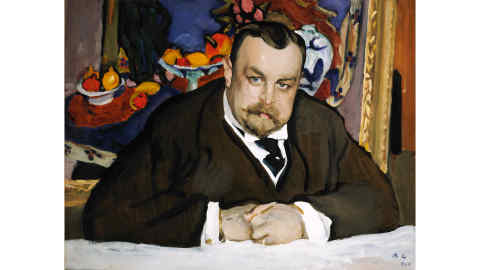 The arts desk of FT Weekend is generally a contented little place. We are chatty. We are pally. We make one another cups of tea, giggle at one another’s dangerous puns. When we level out one another’s gaffes, it’s only ever so barely passive-aggressive.

But now, in our small band, I’m sorry to report that there’s discord. Dissent. Russia is at struggle, and so are we. And the trigger is the knotty topic of returning artistic endeavors which have been on worldwide mortgage.

A number of days in the past, the fabulous Morozov assortment, some 200 Impressionist and fashionable masterpieces which had been lent from various Russian museums to the Fondation Louis Vuitton in Paris for a spectacular present, arrived again in Russia. A shame, within the view of one in all my colleagues — that is clearly morally flawed; they need to have been held.

No, no, say I — these works are in public collections in Moscow and St Petersburg and to carry them would solely be to punish the extraordinary folks of Russia.

The west’s coverage is to punish them, cries my colleague. It’s struggle. And their leaders are punishing them already — possibly ultimately they’ll do one thing about it.

A number of works have been held again by the French authorities: two belonging to sanctioned oligarchs, and one which can be returned to Ukraine when it’s secure to take action. The others trundled via Belgium and Germany on convoys of vans and had been then ferried to Finland, from the place they reached Russia. Each of the 30 lorries apparently carried an insurance coverage worth of as much as $200mn.

The diplomatic agreements had been tortuous too: French authorities had to make sure that each nation on the best way agreed to not seize the artworks, and categorised them as not being “luxury goods” — the Fondation Louis Vuitton is backed by luxurious magnate Bernard Arnault.

Art isn’t just one other department of luxurious items, one other piece of property to be bargained with

Quite aside from the back-and-forth negotiations throughout the FT’s arts desk, there are greater questions. Of course artwork is commonly a luxurious of the super-rich, influential oligarchs amongst them, and — sadly — it most likely does need to be handled like yachts and homes and some other useful holding. But ought to artistic endeavors in public collections be pawns of worldwide politics?

Yes, says my colleague. We have to make use of any and all weapons to attempt to have an effect on the course of Russia’s aggression. No, I reply. We need to proceed to behave in ways in which match the values we’re making an attempt to uphold (although I’m conscious how pious that may sound); and to underline that artwork isn’t just one other department of luxurious items, one other piece of property to be bargained with.

Both of us, naturally, declare the ethical excessive floor right here.

Returning loans from Russian museums — works have gone again from Italy, from Japan — has precipitated ructions for the reason that starting of the disaster, particularly for the conduit Finland. The V&A in London can also be in difficulties over treasures in its current fantastic exhibition of Fabergé eggs, which ended some weeks in the past. Some of the Fabergé objects had been lent by the Moscow Kremlin Museums, and have been returned. But one of many jewelled eggs was purchased in 2004 by the now sanctioned oil and fuel mogul Viktor Vekselberg, who later handed its possession to an organization registered in Panama, Lamesa Arts Inc; it’s normally housed in his non-public Fabergé Museum within the superb Shuvalov Palace in St Petersburg, which is open to the general public. The similar assortment additionally lent the V&A a gold and enamel field, and each have been retained in Britain.

So it is a tough one: do these objects depend as public artwork, or as items of personal wealth? Is their return permitted, beneath present guidelines? Is it moral? I’m glad to say it’s the UK Treasury and tradition ministry who’re wrestling with this downside.

Beyond the ethics, there are pragmatic questions. When it involves loaned gadgets, versus objects held in everlasting collections, museums actually need to return them. International non-seizure agreements are in place; the museum world and an enormous variety of non-public collections function on a goodwill tit-for-tat of lend and borrow that’s important if we’re to have the true luxurious worth of artwork — that’s, the luxurious of truly seeing it, all over the world. Break these conventions by refusing a return, even after we passionately disapprove of a selected regime’s actions and insurance policies, and rather more is probably being damaged.

Then there’s the nitty-gritty. Who shops the work? Who pays the insurance coverage? (Imagine the premiums on the Morozov assortment.) And lastly — again to ethics maybe — who will resolve when it may well go residence once more? Even if hostilities in Ukraine ended tomorrow, at what level would Russia be seen as sufficiently worthy or penitent to benefit the return of its artistic endeavors? That might be an extended wait.